– Can you see time with the help of knitting?

OWN OUR OWN TIME AND UPLIFT
Kerstin Lindström,Sweden

Art in form of monumental knitting

To stand along with 80 people and work on the same knitting is a pretty bizarre but also wonderful experience. Nobody wants to quit. Knitting is by nature something private, something which is done by your own hands. Here arises an unexpected and strong sense of togetherness, a kind of human power station.

OWN OUR OWN TIME 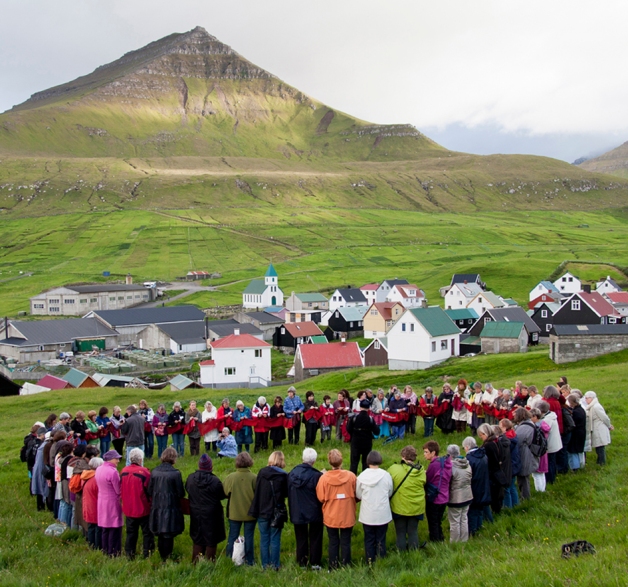 Own our own time I Faroe Island, photo Gunnar Backman.

The summer 2011 Own our own time I, was performed in the small village Gjogv on the Faroe Islands. The work involved 80 women from nine different countries, 20 Faroese dancers and one accordion player. The women had at various locations around the world saved a piece of time in terms of red knitting’s. This project was the start of a series of studies on the ability to see time. Time linked to a human pace. This time portrayed by brown yarn from Sirri, a local yarn producer. In collaboration with www.gavstrik.dk

Own our own time  II Shetland, photo Austin Taylor.

Own our own time II has also been shown at the Shetland Islands in 2013, in collaboration with an international Textile Festival, In the Loop 3.5. The festival was organized by Shetland Art together with the University of Southampton. On Shetland the time came to expression in the form of green yarn donated by the Shetland company Jamieson & Smith. 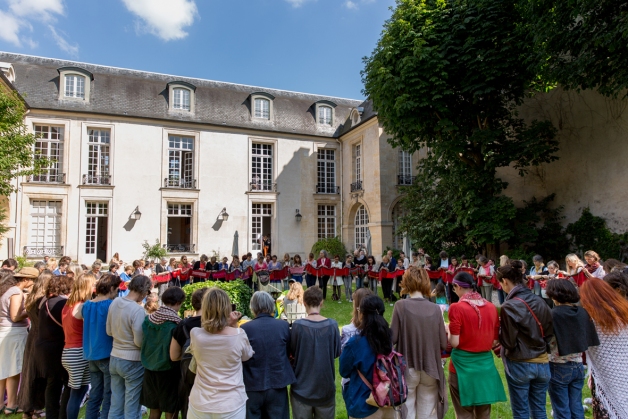 Own your own time III Paris – -® vinciane verguethen-4182

The performance Own our own time III – Urbantime was set up in the garden at the Swedish Institute in the Maraisdistrict in Paris Sunday 15th of June 2014. About 100 knitters + public came and participated in saving an hour of urbantime together. A Knitting Performance in the context of the exhibition Slow art and festival Nomades. The grey and golden yarn was produced by the French company Fonty. 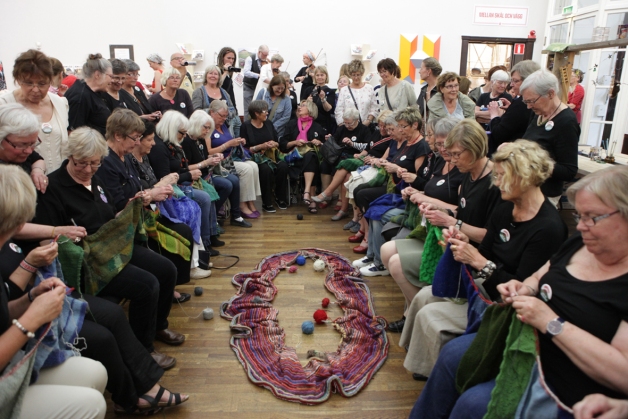 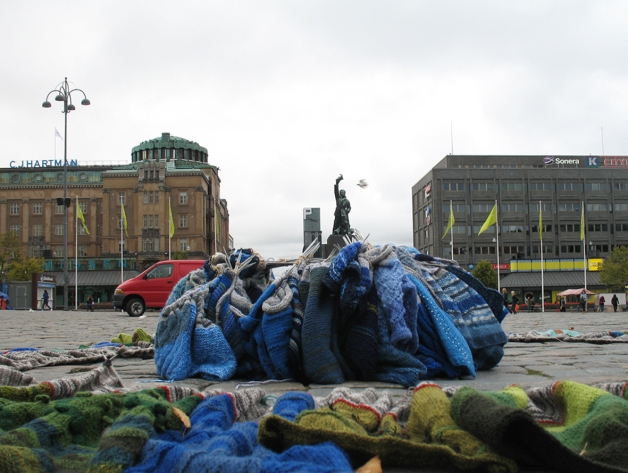 Uplift is the title of another project. Uplift portrays human time in relation to the ground. In the Kvarken Archipelago area there is an ongoing, with geological standards, unique time travel. In this area the earth rises with the speed of 0,8 mm a year. Uplift I is a blue / green 24-patricipants knitting describing the landscape of Västernorrland, Sweden, also called the High Coust area. The work was first shown at Liljevalchs Arthall in Stockholm, the summer 2012. Uplift I has also been shown in various locations in Västernorrland, Sweden. In September 2013 Uplift II took place in the town square of Vaasa, Finland to the tunes of Finnish tango. This time there were 64 participants from Finland and Sweden and the knitting was blue, like the Baltic Sea. Österbotten in Finland is also a part of the Kvarken Archipelago. When Uplift I and Uplift II was knitted together, each one separately, yarn of different shades of gray were used. One ambition in all the monumental knitting’s is to use locally produced yarn as far as possible, as part of the story.

All images and text © Kerstin Lindström